A couple weeks ago I packed my bags and headed to Portland. This was the first time I ever went on a trip alone and decided to go to a city I had never been to. Portland really is a charming city with so much to do. I stayed downtown at the Hotel Modera and spent all of my days walking, exploring, eating, and relaxing. If you’ve never traveled alone before, I highly suggest it, even if you are only a short plane ride from home.

My first stop after dropping my bags off at the hotel was Blue Star Donuts. I have a donut addiction and any time I go to a new city I have to try a local donut. One thing I quickly learned is that locals judge you by your donut choice. The two main options are Vodoo and Blue Star and every person has a strong opinion about which is better and which you should visit. Since I tried Vodoo in Denver, I went with Blue Star and was NOT disappointed. I tried the lemon poppyseed old fashioned and the orange olive oil cake donut. Both were delicious and I would eat them again.

After sitting at the window people watching and enjoying my donuts and the sunshine, I decided it was time to walk it off and start exploring. My first stop was the famous Powell’s book store. Within a few minutes of being inside, it became one of my favorite places. The bookstore has every book you could imagine and is such a peaceful and relaxing place. I kept walking around and around exploring all of the rooms. I ended up spending close to two hours walking around, taking it all in, and getting my hands on a couple fun things. With my purchases in hand, I hit the streets again to explore all of the cute boutiques and unique shops in the area. Since I had been up since 5am I was extra excited when the hotel called saying my room was ready and I headed back to unwind and relax before dinner. 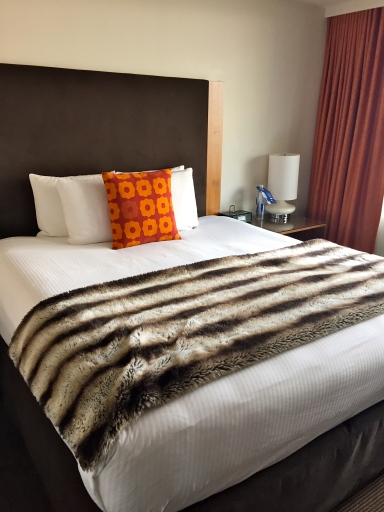 The room was great. It was chic and modern and I love a good throw blanket. The bathroom was bright and spacious with a fun sliding door. I took full advantage of a big bed all to myself and took a pre-dinner nap. I heard from a few people that Departure was a great restaurant so I freshened up and headed there for happy hour. A wise friend who travels often for work told me to sit at the bar and that’s exactly what I did. I had the bartender whip up his favorite tequila cocktail and ordered a teriyaki chicken skewer and garlic fried rice. Both were delicious and I would undoubtedly eat them both again. I met some really nice people at dinner who gave me their must see list and made dinner alone not so uncomfortable.

After a long and exciting day, I was super excited to unwind with a long bath and a good nights sleep. Check back Wednesday to hear all about Day 2!